Did CHOs make us human? I doubt it

"I like to start with an evolutionary perspective" — Jennie Brand-Miller 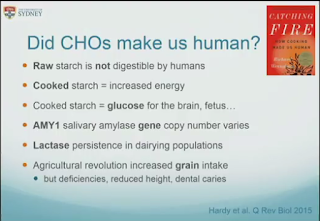 Yes, the brain requires a lot of energy; no it does not have to come from dietary glucose

I agree wholeheratedly that our brains require a lot of energy, much more than other organs, and that our needs are many times more acute than in other primates. Getting this energy was critical for our evolution. However, the idea that the brain "runs" on glucose, and that this shows a requirement for exogenous glucose is incorrect, and omits well-known evidence.

First, our bodies are capable of synthesising enough glucose in the absence of dietary sources to fulfill the most conservative estimates of requirements. As conceded early in the presentation, we are known to be able survive without exogenous glucose. If we could not supply our brain needs in this way, this would simply not be possible. That glucose is mostly synthesised out of protein, and the process is called gluconeogenesis. This fact alone is enough to render this argument irrelevant, but there is more. In the situation for which no dietary glucose is provided, not only can we still make enough glucose endogenously to meet those needs, but in practice what happens is that our needs are different. Instead of running primarily on glucose, our brains metabolism runs mostly on ketone bodies, and uses glucose for only a small portion of its needs, far less than our capacity to generate it.

Fetal and infant growth does not depend on dietary glucose

Brand-Miller also insists that "The fetus grows on the mother's maternal blood glucose.", as if this should settle the matter once and for all. However, she neglects to mention that fetuses make extensive use of ketones. I've covered infant brain growth and the importance of ketone bodies in this context several times, so I won't go into it here. See Babies thrive under a ketogenic metabolism, Meat is best for growing brains, What about the sugars in breast milk?, and Optimal Weaning from an Evolutionary Perspective, for fully referenced discussion of the fuel used by growing babies. In any case, maternal blood glucose is maintained just fine without dietary sources, so even if babies did not use ketones, the point would be moot.

Since our brain energy needs are met perfectly well with either a high glucose intake or a low glucose intake, it cannot be reasonable argued that our large brains must have developed under conditions of high glucose intake. There are still at this point two equally plausible evolutionary hypotheses that would enable the evolutionary development of large brains: increased consumption of exogenous glucose, and increased consumption of exogenous fat. An increase in both is also a plausible hypothesis, either together or in alternation. For simplicity, let's start by considering one state or the other as being the predominant evolved state. Let's review what evolutionary circumstances would be required for each hypothesis, and what other circumstances would support it without being necessary. Then we can see what evidence we have for those circumstances.

The reason we would need fat, and not just protein in the gluconeogenesis case, is that we are limited in our ability to metabolise protein. Protein is better conceived of as a mainly a micronutrient, rather than a macronutrient, because of its structural importance. Besides water, our bodies are primarily made of amino acids and fatty acids. This is one reason why when we rely on gluconeogenesis for all of our glucose needs, we also have reduced glucose needs. It spares protein for more important things.

Protein availability is also of crucial importance even for the exogenous glucose hypothesis, because it is still a fundamental nutritional need outside of energy requirements.

Beyond protein, we would need to supply all of the nutrients that proper brain development requires. These include the minerals iodine, selenium, iron, zinc, vitamins B12, A, and D, and the vitamin-like choline, and the fatty acids DHA and arachadonic acid. Note that of the minerals listed here, animal sources are much more bioavailable, and that plant sources contain substances that actively interfere with absorption. Of the vitamins and fatty acids, one (B12) is not available even in precursor form, and the others only in precursor form. Humans are known to have low and variable ability to synthesise the necessary components out of precursors. It is generally agreed upon in the scientific community that because of these hard requirements of the brain, a significant level of animal sourced food must have been part of our evolutionary heritage. This is supported by the absence of evidence of a single indigenous society that did not include some form of animal sourced food.

If the energy source were dietary glucose, we would require:

If the energy source were dietary fat and protein, we would require:

A year round, abundant source of fat and protein from

Evidence for at least some hunted or scavenged game is well supported in various ways. We have direct evidence of hunting and scavenging going back long before evidence of fire, in the form of tools and bones. Unlike in the case of tubers, cooking is not necessary to obtain nutrients and energy from meat and animal fat. Because of our protein and nutrient requirements, we would already have to be eating animal sourced food anyway, regardless of our source of energy.

If the meat were lean, this would not by itself solve the energy problem. However, evidence suggests that the game available during the time in question was much fattier megafauna than modern leaner game [3]. Insofar as this is true, it seems a stretch to suggest that early humans would have hunted game that met their protein and nutrient requirements, and then discarded an abundant energy source that came right along with it in favour of tubers. Moreover, evidence suggests that our meat eating began with scavenging bones and skulls from other carnivorous kills, eating some scraps of meat, but primarily the marrow and high-fat brains we were able to crack our way into.

In fact, the diversity of human diet after the extinction of the megafauna can be viewed as a variety of adaptations to the loss of our evolved diet, rather than evidence that we evolved to eat exactly like any one of them in particular. This brings us to the supplemental arguments from Brand-Miller.

What can we conclude from the diets of modern hunter-gatherer societies?

It seems disingenuous to cite the Hadza, the society with the highest reported carbohydrate intake as evidence that we need carbohydrates to thrive. There are several known indigenous peoples or other groups that subsisted on very low exogenous carbohydrate levels before introduced to wheat and sugar. This includes Mongolians, Plains Indians, Brazilian gauchos, Arctic peoples, and Maasai. The very existence of these societies contradicts the thesis. However, none of them, high carbohydrate or low, should be used as demonstration of a particular evolved way of eating. They each show a way that is viable in the given environment. Carbohydrate can be used as a primary energy source and so can fat. But this is not enough to show which, if any, was primary during the time our brains evolved to make us anatomically modern.

Why do we have more copies of amylase than other primates?

On average we have more copies of AMY1 than other primates. Brand-Miller claims that our number of copies of salivary amylase genes have changed because of our dietary intake of dietary carbohydrates. This is a hypothesis. Fernandez and Wiley recently discussed several problematic inconsistencies in this hypothesis [4], including the high variability in every population, the fact that starch digestion isn't materially affected by salivary amylase, and the existence of alternative possible functions of the gene. I have touched on the apparent relationship to stress in a previous post (Science Fiction).

Some populations have extended lactase production

I think this supports more use of animal based nutrition than a need for sugar in particular.

The hard-wired response to the taste of sweet is important and interesting, but I think it shows that sugar was rare, not a staple.

Evidence supporting endogenous glucose rather than exogenous as our evolved default

In contrast to other species we have studied, humans stay in ketosis even when they have substantially more protein than basic needs require. Like many species, in the absence of significant dietary carbohydrate, when our protein or caloric needs are not met, we produce ketones to spare protein and provide non-glucose energy, and we change our metabolisms to require less glucose. Once protein is sufficient, though, other species will go back to the glucose based metabolism. Humans do not. Humans, apparently uniquely continue in ketogenic mode until and unless so much protein is ingested that the amount being metabolised is resulting in so much glucose that it has to be stored. This suggests that humans had an evolutionary timespan in which access to protein and fat was consistently high and carbohydrate was low for at least long periods. I review the evidence for this here: Ketosis Without Starvation: the human advantage

The available evidence supports at best a seasonally alternating system of glucose and animal fat reliance for brain energy, and does not refute a long-term evolutionary adaptation for little and infrequent dietary glucose.